A Night Under the Stars with Landau – A Logan Homecoming Concert 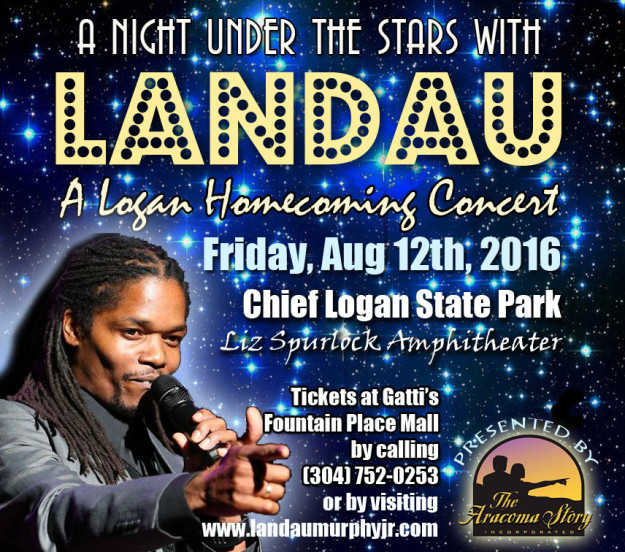 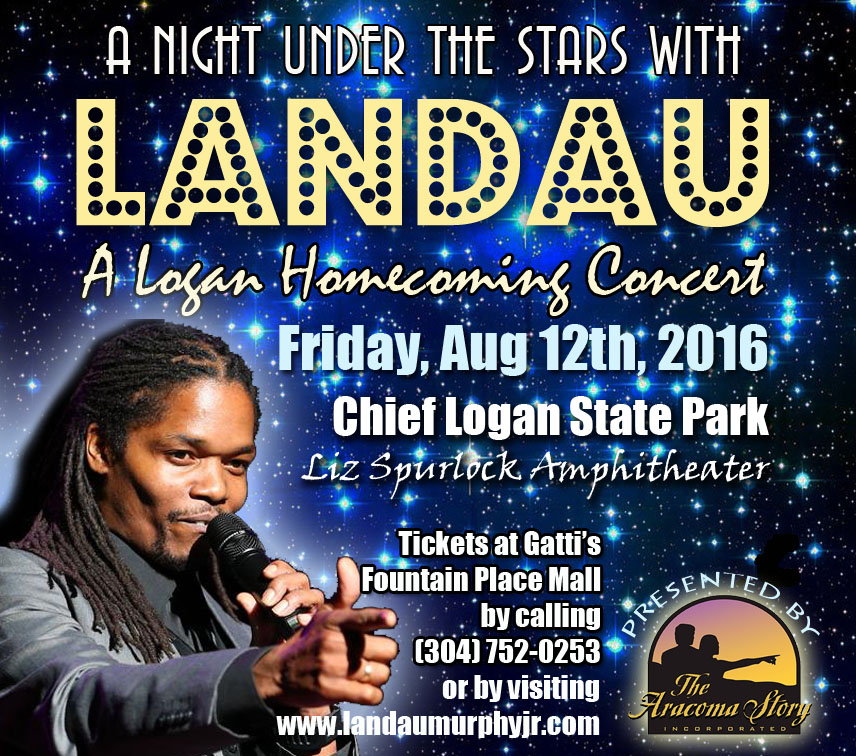 Reserved seat tickets are on sale now at Gatti’s at Fountain Place Mall in Logan, online at landaumurphyjr.com, and by calling (304) 752-0253. Tickets are just $20.00 in advance and $25.00 day of show. A very limited number of Gold Circle VIP seats, including a backstage reception with Landau and the Band, will be available for $50.00.

Landau and his band will be singing his new top ten hit Come Home to West Virginia along with songs from his upcoming new album, and performing many of the classics he’ll be singing during his PBS special at The Grove in Hollywood and during Labor Day weekend with The Boston Pops Symphony Orchestra!

Sponsored in part by Robert Noone Legal Services, specializing in foster care and adoptions 304-784-8818. 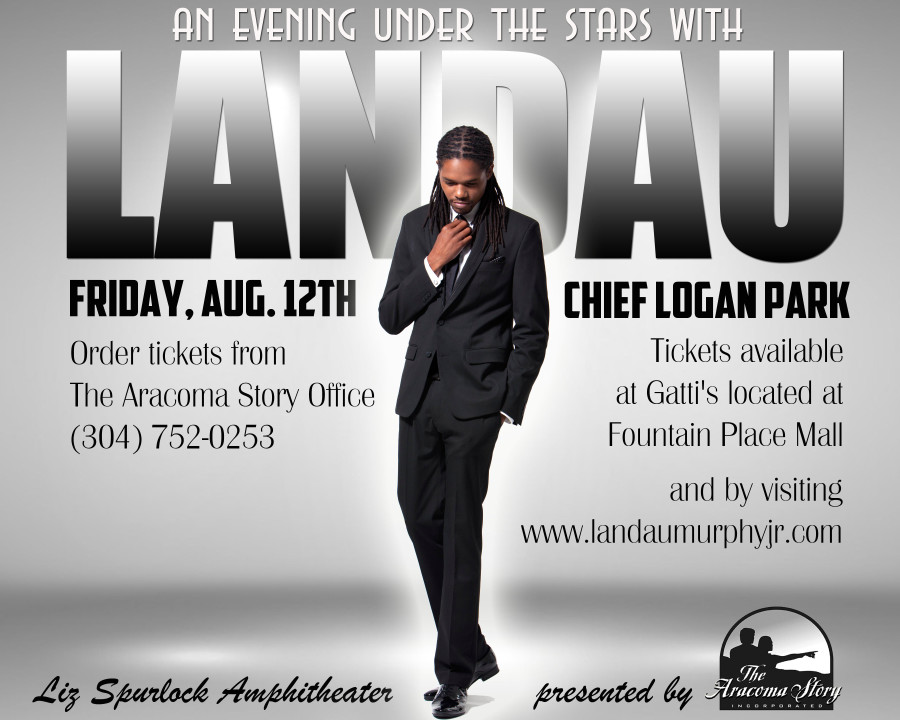 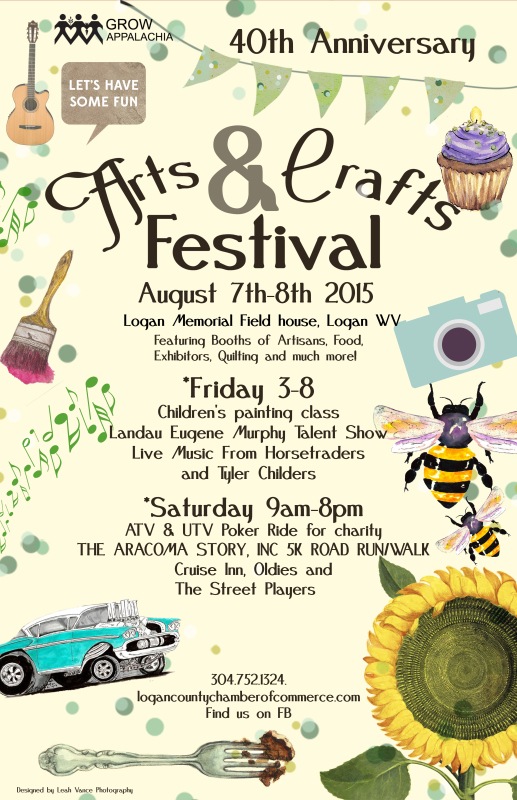 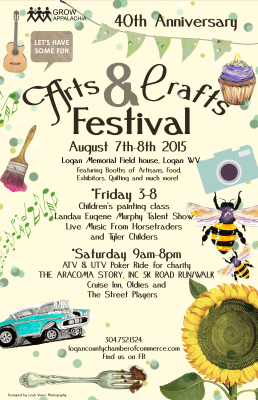 The 40th Annual Logan County Arts & Crafts Festival is just around the corner! The festival will be held this Friday August 7th from 3 – 8 PM and Saturday August 8th from 9 AM – 8 PM at the Logan Memorial Field House in Logan, West Virginia.

On Friday, August 7th the festival will kick-off with a Creative Art Activity hosted by Leah Vance Photography beginning at 3:00 PM. America’s Got Talent winner Landau Eugene Murphy Jr. will be on hand to greet visitors to the festival as he welcomes contestants to the Landau Eugene Murphy Jr. Talent Competition, the contest where he once took home first prize prior to winning America’s Got Talent! This year’s contest has been renamed for Landau, who will be available at his merchandise table for pictures and autographs starting at 5:00 PM. Contestants will take the stage at 6:30 PM to compete for cash prizes. The contest is free to enter; however, all contestants must be registered by the deadline of Friday, July 31, 2015 to compete in the contest. The talent show will be hosted by Burke Allen of Allen Media Strategies and Dave Allen of Dave Allen Communications. There will be performances on the outside stage by the A Mile to Nowhere Band, Horsetraders Band and Tyler Childers.

For more information you may call (304) 752.1324 or email logancountychamber@frontier.com or visit us on Facebook at 40th Annual Arts & Crafts Festival. 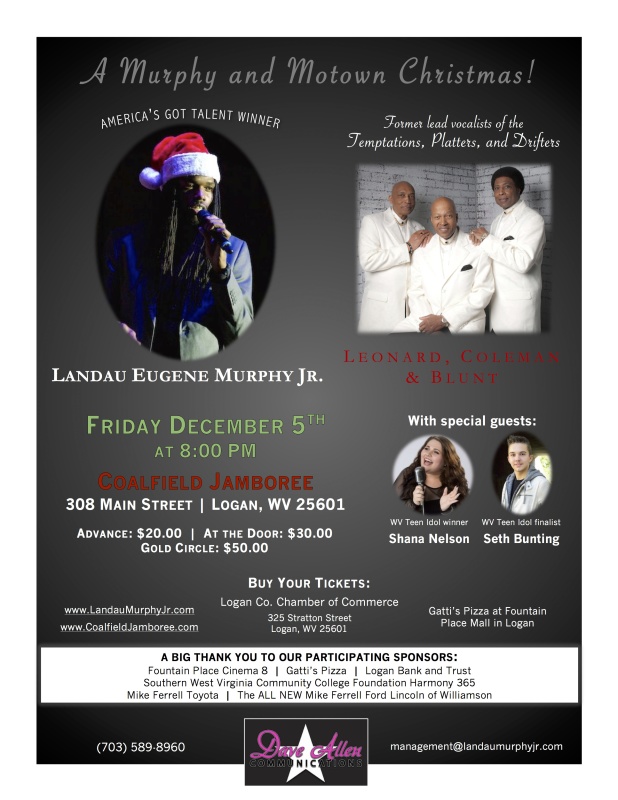 Landau Eugene Murphy Jr. Kicks Off His 2014 National Christmas Tour with Charity Performance in His Own Hometown of Logan, West Virginia on Friday December 5th

America’s Got Talent Winner will bring special celebrity guests from Temptations, Platters, and Drifters as part of benefit performance, and be Grand Marshal of City of Logan Christmas Parade

Landau Eugene Murphy Jr., the dreadlocked classic crooner vocalist who won season six of NBC Television’s America’s Got Talent, one million dollars, and a Columbia Records contract, kicks off his 2014 Murphy and Motown Christmas Tour in his beloved hometown of Logan, West Virginia on Friday December 5th with a holiday charity performance at the Coalfield Jamboree Theatre. Tickets will be available this Monday, November 10th HERE and will soon be available at the Logan County Chamber of Commerce.

Landau will be performing hits from his debut CD “That’s Life” and his holiday release “Christmas Made For Two” and will preview songs from his upcoming third CD slated for a 2015 release. Also appearing with Landau as his special celebrity guests Leonard, Coleman & Blunt, the former lead vocalists of the Temptations, the Platters, and the Drifters, who have sold over 100 million records worldwide and scored dozens of number one hits.

Every holiday season, Landau is dedicated to helping hometown charities: his tour kick-off show in Logan is no exception. The Salvation Army, Logan High School Prayer Club’s Canned Food Drive, and the Matt Patterson Christmas Toy Drive are all receiving benefits and support from Team Landau in Logan. Ticket holders who donate to these charities can attend a special pre-concert VIP reception with Landau and Leonard, Coleman & Blunt to meet the stars, take photos, get autographs, and spread the holiday cheer.

To help coalfield residents of Logan County whose funds may be a bit tight this Christmas season, Logan County School students from kindergarten to 12th grade will receive the opportunity to receive one free ticket with each adult admission purchase.

Landau will also be serving as the Grand Marshal of the annual City of Logan Christmas Parade starting at 6:30 pm. The Murphy and Motown Christmas Concert will begin after the parade at 8:00 pm.

All of the Murphy and Motown musicians will be available after the show to meet with fans and pose for photos. Landau will be autographing copies of his classic hit Christmas album, Christmas Made For Two.

The special event is made possible by: