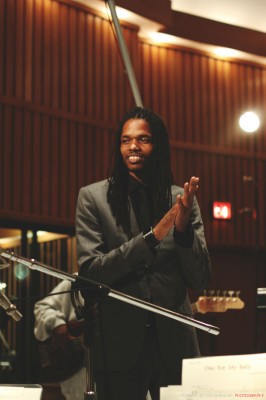 Seeing Landau in concert is a revelation; backed by the dynamic Landau Big Band, you’ll always hear swinging arrangements of Great American Songbook classics from Frank Sinatra, Dean Martin, Nat ‘King’ Cole and many more, along with a dusting of that special Motown Magic that is sure to move your feet and make you sing along.

And after the show, every show, you’ll always have the opportunity to meet Landau one-on-one for photos and have the chance to talk with him about his incredible rags-to-riches story.  “It’s my favorite part of the night; it’s something we always do. Sometimes I’m the last one at the venue, talking to fans and friends. The janitor is waiting on me to lock up!”

Landau was born into extreme poverty in the Appalachian coalfields of southern West Virginia. His parents split while he was in elementary school, and Landau was shipped off to Detroit in the middle of the night. He woke up in the Motor Cities notoriously gang and drug-riddled “7 Mile” neighborhood. Landau likes to say that he went from Almost Heaven to Little Baghdad overnight!

After a series of dead-end jobs, run-ins with the police and a too-soon failed marriage, Landau eventually found himself homeless and sleeping in his car. Then, his voice became his calling card.

“I loved to play basketball in Detroit, and these guys were good. Some of them went onto the NBA. But we were in the hood; it wasn’t anything to see guns drawn on the court after the game, so to keep people cool and laughing, when I’d dunk on someone, I’d sing a Frank Sinatra song like “Fly Me To The Moon” and everyone would laugh and put their guns away.”

Eventually, that one-of-a-kind voice would lead him back to West Virginia to perform for local charities and nursing homes. Landau says, “I was singing for charities, when most of the time, I had less than the people receiving the charity proceeds did, but that was OK because I was singing.”

At the end of his rope, Landau tied a knot and pulled himself back up by auditioning for NBC TV’s “America’s Got Talent” with thousands of others. After months of competition, Landau emerged the winner, scoring a million dollars, a recording contract, and America’s hearts, and he’s never looked back.

Landau’s Columbia Records debut album “That’s Life” reached number one on the Billboard Jazz Charts and was followed by “Christmas Made For Two”, “Landau” and his latest “Landau Live In Las Vegas” recorded during a performance at the legendary Caesar’s Palace.  Landau has made dozens of TV appearances including “The Today Show”, “The View”, CNN, “Fox and Friends”, “The Talk”, the Macy’s Thanksgiving Day Parade, and the Hollywood Christmas Parade.

He’s performed all over the world, from China to New York City, Los Angeles to Europe where he had the honor to perform for U.S. servicemen and their families stationed there. He’s sung the national anthem prior to games by the Los Angeles Lakers, Washington Wizards, New York Rangers, Baltimore Orioles, Oklahoma City Thunder, Washington Nationals, and his beloved West Virginia University Mountaineers during a nationally televised homecoming game.

He’s helped raise millions of dollars for charities, many in his home state of West Virginia where he serves on the Board of Directors for the Children’s Home Society of West Virginia and was named “West Virginian of the Year” by the Governor’s office and the state’s largest newspaper.

Landau’s book “From Washing Cars to Hollywood Stars” featuring his amazing story reached #1 on Amazon, his “Live in Washington DC at Bethesda Blues and Jazz” concert DVD was a best-seller and he had his first movie cameo in 2017 in the Ron James biopic “Choices”.

A decade in, Landau remains humble especially during those post-show meet-n-greets. “I identify with those people who stick around to talk with me. These are down-to-earth, salt-of-the-earth folks who work hard, take care of their families and give back to their communities. They’re what the best of America is all about, and I wouldn’t be here without them.”

But, Landau is there, because of them…with a smile on his face and a song in his heart.

For media requests, please contact Burke Allen at (703) 589-8960 or management@landaumurphyjr.com