Landau’s 10th Home for the Holidays Tour is Back…Virtually!

Celebrate the season with America’s Got Talent winner! 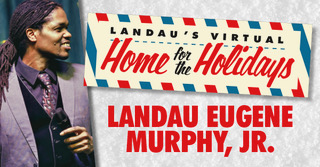 For many, attending concerts during the holidays is a beloved annual tradition.  Even in 2020, there is still a way to make holiday memories from the comfort of your own home!

We are pleased to present America’s Got Talent winner and Columbia recording artist Landau Eugene Murphy Jr. in his 10th annual “Home for the Holidays” virtual performances from December 16th to December 23rd.

December 16: Presented by Robert Noone Adoptions

December 17: Presented by ARC of the Mid Ohio Valley

December 20: Presented by the Clay Center for the Arts & Sciences

December 21: Presented by City of Beckley and Theatre West Virginia

These special evenings of holiday cheer will be filled with holiday hits and Christmas classics from the crooner’s top-selling “Christmas Made For Two” album, and his special brand of “Murphy Magic”!  Gather the whole family and huddle around the screen as you interact directly with Landau by requesting your favorite songs, send special holiday shout outs and more!

“It might be unsafe for you to come to a theater to see me, so I’m going to come to see you this Christmas, online.  We all need to keep that human connection to one another, especially during the holiday season.  I can’t believe this is my 10th Christmas tour-what a blessing to be able to do what I love, and it’s all thanks to you for supporting me and helping me live my dream,” says Landau.

Landau’s 10th annual Christmas tour comes directly to your home with a variety of styles, stories, holiday hits, and musical memories. This virtual performance is easy to watch on your smart TV, phone, laptop, or tablet.  Tickets are just $20 and VIP Packages are available for just $40 and include a virtual backstage pass and Christmas stocking filled with Landau holiday goodies! To purchase your pass to “Home for the Holidays”, visit www.stageit.com/landaumurphyjr.

About Landau Eugene Murphy Jr.:  The season six winner of NBC TV’s ‘America’s Got Talent’, Landau has released three albums and a live-in-concert DVD, including his Columbia Records debut ‘That’s Life’ which spent six weeks at #1 on the Billboard Jazz charts. The versatile vocalist’s new project ‘Landau Live in Las Vegas’ was recorded at the legendary Caesars Palace and is slated for a 2021 release. Landau’s book ‘From Washing Cars To Hollywood Star’ was an Amazon #1 best-seller, and he made his film debut in 2018’s ‘Choices’. He has toured around the world and appeared on hundreds of TV and radio shows and podcasts. Landau was named one of the “Ten Outstanding Young Americans’ by the United States Jaycees, was nominated for an NAACP Image Award, received the ‘Reality TV Show Personality of the Year’ Award and the ‘West Virginian of the Year’ honor while helping raise over a million dollars for charities in his home state of West Virginia.