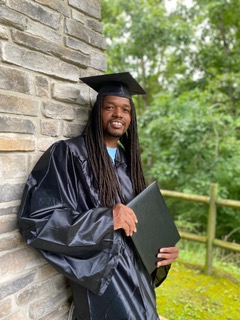 put his forced time off the road to good use during the COVID-19 shutdown.

Murphy went back to school online this spring and summer and earned his high school equivalency diploma after dropping out in the 11th grade three decades ago. That one impulsive decision would haunt Landau for years, causing the once-promising but usually unmotivated student to drift between low-wage jobs without any chance of career advancement. Murphy sold shoes, worked at a temp agency, flagged cars on a road crew, and washed dishes at restaurants for years-and that’s when he could find work at all. Landau lived hand-to-mouth nearly destitute for many years, and at his lowest point, was completely homeless and living in his car.

Murphy struggled for the basic necessities for a full 20 years after dropping out of high school; he shuffled between the streets of Detroit and the crushing Appalachian poverty of his home state of West Virginia, unable to provide for himself or his family. Murphy was barely scraping by washing cars when his modest home was ransacked and robbed in 2010. “They even ripped the copper out of the walls, probably to sell for drugs.” Landau auditioned for the TV talent show wearing the only shoes, jeans, and jacket he owned.  “I was at the end of my rope…I was 35 years old, with a $10 bill in my pocket, and that was all the money I had in the world. I literally had nothing to lose.”

But it turns out that Landau didn’t lose.

America fell in love with the humble dreadlocked car washer with the sincere back story and the Sinatra-style singing voice. Fans from across the country voted Landau to the top spot on the top-rated NBC talent show in the summer of 2011. He won a million-dollar grand prize, a Las Vegas show and a recording contract with Columbia Records. Landau’s debut CD, helmed by Rod Stewart’s Grammy-winning producer Steve Tyrell, shot all the way to number one and stayed there for six weeks, and Landau hasn’t looked back since.

With that one-in-a-million good fortune and the wind at his back, Murphy turned his life around and launched a successful and now decade-long career performing as a singer across three continents, appearing in his first movie and co-author a top-selling, award-winning book about his amazing story titled appropriately enough “Landau-From Washing Cars to Hollywood Star.”  And, he used his own good luck to help others less fortunate, helping raise millions of dollars for children’s charities in his home state of West Virginia.

With success comes demands on your time. Soon, Landau was spending over 200 days a year on the road, with barely enough time at home between tours to catch his breath, get his show suits dry cleaned, and then head out again.

But still, that impulsive mistake to quit school he made over 30 years prior haunted him. Then, in March 2020, Landau’s hustle-bustle high-flying world came to an abrupt, extended stop.

“Suddenly, like everyone else in the entertainment industry, I wasn’t able to do shows, or go anywhere or do anything. It’s a strange thing, to completely shut it down like that. I don’t want to not perform; I love what I do, and I’ve wanted to do it for my whole life. I did some shows online from my home studio and spent a lot of time with my youngest son, which I loved, but I still had so much more free time than when I was on the road, and I didn’t know what to do with myself. My manager and a few close friends kind of teamed up and encouraged me to make this downtime really count for something, and I’m so glad I did.” With his inner circle’s help, Landau got signed up at his local adult literacy center to begin online studies and get his long-delayed diploma.

Murphy said he was scared at first because it had been so long since he’d been in an academic setting and “I didn’t want to let anyone down…especially myself.”  And it wasn’t easy at first, especially the advanced math module.  “You can forget a lot of algebra and geometry in thirty years,” he says, grinning at the memory of learning how to study again.  “Luckily, when I sing, I have to remember the words to dozens of songs, so I can memorize information pretty well. It still took some work…but it was so completely worth it.” After spending about a month studying, he passed the first four class modules in pretty quick order, and finally aced the advanced math on the third try. “I wasn’t going to give up…I’d waited way too long and come too far. I wanted this diploma as much as I wanted to turn my life around by going on AGT. Maybe more.”

Landau says getting your diploma at any age is a huge win for anyone who does it. “Look, I don’t care if we’re talking about staying in high school instead of dropping out or going back after thirty years and getting your diploma like I did. You’ve got to do this for yourself, to give you a shot at creating a better life.  I talk to kids all the time when I visit schools, and they tell me they want to be a famous singer or rapper, or they want to play in the NBA or NFL.  You can’t predict winning a TV show like “America’s Got Talent” or becoming a professional athlete. That’s a one-in-a-million thing. The best way to predict your future is to create it, and that starts with getting an education. Invest in yourself; you can’t lose.”

Cathy Adkins, with the Logan County WV Board of Education, has advised Landau and many other adults on why it’s so important to earn their high school equivalency diplomas. “We’re so proud of Landau and the example he’s setting for folks to get their diploma, no matter what their age, to make a better life for themselves and their families.”

Adkins says that statistically, high school dropouts experience a poverty rate of 30.8%, and incarceration rates are 63 times higher in dropouts than among high school graduates.

There is no cost to adults to take their high school equivalency diploma test in WV. You can register online and get more information at https://wvde.us/adult-education/high-school-equivalency-diploma/ or by calling the WV AdultEd Hotline at 1-800-642-2670. The national website for more information is

Landau is now advocating for adult literacy and says that with the pandemic dragging on, it’s a really good time to get your high school equivalency diploma.

“A lot of people are out of work, just sitting at home watching their world slip away. Do something meaningful with this time to make yourself more valuable, more able to jump on whatever opportunities you can go after. Break that cycle of not being able to get a job because you don’t have a diploma; you’ll change your life, but also change the life of your kids, and their kids, forever.”