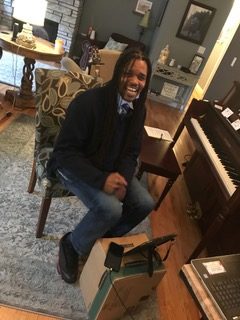 It all came together fast.

On Sunday evening April 19th, Logan County WV resident Landau Eugene Murphy Jr. broadcast his first-ever “Landau Live From Logan” concert on social media.  It was billed as a down-home  tribute to essential service workers, and all those who are social distancing at home as hundreds of millions around the world battle COVID-19.

But then, through the magic of the internet, within the first few hours of broadcast, it had over 30,000 views from around the world.  And, the show itself wasn’t even in the plans 48 hours earlier.  You can watch the replay here: http://bit.ly/landaulivefromlogan

Landau’s management team had planned to debut a full-length pre-recorded concert online for fans, but when his old friend Bob Noone arrived in Logan this past weekend, a quick plan was hatched for a bare bones social-distancing show. No band, no fancy sound and lights, just two friends singing and playing for whoever might stumble across their Facebook feed.

“It was just something we wanted to do for all the people that can’t get out due the pandemic. I’m one of them; I really miss touring, doing concerts and being with people,” said Murphy, the America’s Got Talent winner, Billboard #1 selling jazz artist and best-selling author.

Like all musicians, Landau’s tour dates have all been canceled from March through at least June.  And, while he and his band are temporarily unable to continue to make a living doing what he loves, Landau still has a song in his heart that he needs to get out.  “I just wanted to bring a little joy to whoever might be watching.”

The plan worked bigger and better than anyone expected. Tens of thousands of fans from all over the world tuned in to watch the singer perform a decidedly lo-fi down-home show, with local attorney Noone both sponsoring the show and providing musical accompaniment on piano and guitar.

“We put it together quick; no time to rehearse, but I think that’s what made it special and a really different kind of music experience for Landau’s fans,” said Noone. “I spent most of the show just trying to find the right key and keep up with Landau. He’s used to playing with world-class musicians now that are way above my pay grade. But I was in town and honored to participate, and it was a real kick to play with him again.”

With Landau’s manager and WV native Burke Allen acting as Master of Ceremonies and interviewer from his home studio near Washington, DC, Landau and Bob hunkered down in Logan WV, maintaining social distancing with the help of a tape measure between the singer and his pianist.

They effortlessly burned through an hour of song requests and dedications that poured in from all across the United States and Canada, South America, Europe, England, the Dominion Republic and as far away as South Africa.

The all-request setlist was definitely eclectic; a mix of Sinatra standards, Motown Magic, a tribute to Landau’s friend, the late West Virginia music legend Bill Withers, gospel tunes like Amazing Grace to give inspiration in these trying times. They played Country Roads for all his West Virginia fans, both in the state and scattered around the world.  Landau even sang Happy Birthday to a young out-of-state fan who had met him on tour and wrote a book report about him the next day.

The funniest moment of the webcast was when an Illinois fan said she’d donate to Landau’s charity of choice if he would sing the kid’s sing-along “Baby Shark”.  A smiling Landau gladly “swam with the sharks”, and the Children’s Home Society of West Virginia started receiving funds from all across America.  If you’d like to make a donation, you can do so at http://www.childhswv.org/

The show wrapped up with a heart-warming special tribute to the essential service workers who are keeping America going during the pandemic; while Landau dedicated the Leon Russell classic “A Song For You” to them, photos of health care professionals, delivery drivers, restaurant and grocery store workers and others flashed across the screen.

“I hope we can get back out there on the road again, but for now, I just want everyone to stay safe and healthy so that I can give out lots of hugs when I see you at our shows again”, said Murphy.