How a jazz drummer helped get Wisconsin-based Sentry to Maui 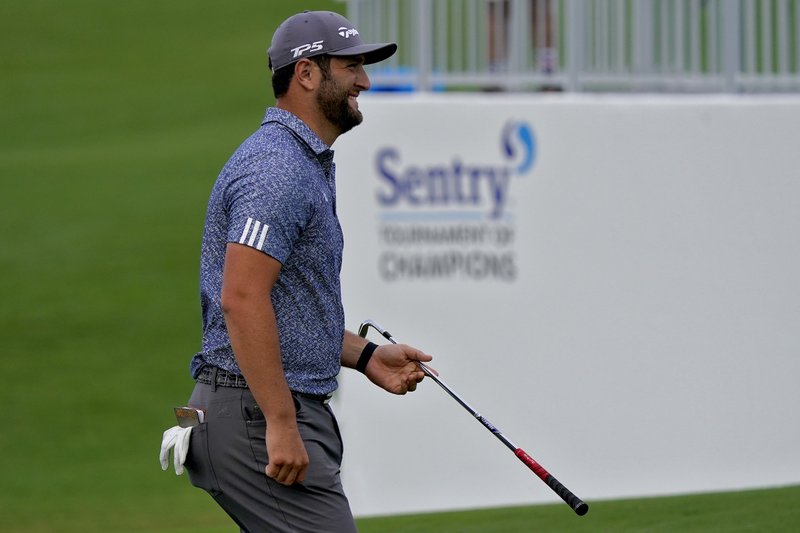 Jon Rahm smiles after chipping in for eagle on the ninth green during third round of the Tournament of Champions golf event, Saturday, Jan. 4, 2020, at Kapalua Plantation Course in Kapalua, Hawaii. (AP Photo/Matt York)

KAPALUA, Hawaii (AP) — The PGA Tour celebrated the start of a new year by announcing Wisconsin-based Sentry Insurance, in only its third year as title sponsor at Kapalua, had agreed to a 10-year extension through 2030.

How a 115-year-old company from the heart of Wisconsin, with no history of national advertising, wound up in Maui was curious enough for Kevin Kisner to ask a most simple question at a players’ dinner Saturday night.

How did we find these guys?

The response from PGA Tour Commissioner Jay Monahan was not what he would have expected.

“Because Ken plays the drums,” he said.

That would be Ken Tackett, who took his own curious route to become a rules official for the PGA Tour.

Tackett, who earned a degree in jazz studies from the University of North Florida, played in various bands before landing a gig as a drummer for the Noel Freidline Quintet in 1996, playing the Las Vegas scene.

When he started a family, he took a job with the West Virginia Golf Association, rising to executive director until he went to work for the PGA Tour. But he still plays, because jazz is in his blood. And he remains a big believer in relationships.

“Anything can spawn out of a relationship,” Tackett said Sunday during the final round of the Sentry Tournament of Champions. “You never know where it can go and what lies ahead. I’m a firm believer that relationships are key to everything in our lives.”

Sentry World Golf Course in Stevens Point is the first destination course in Wisconsin, and last year it hosted the U.S. Girls Junior Championship. Five years ago, Sentry decided to have a grand opening to celebrate the redesign of the course and the new clubhouse. For such an occasion, it hired a band to play.

Mike James, the general manager of Sentry World, once worked in West Virginia as the golf director at the Resort at Glade Springs — the sister property of The Greenbrier — and called Tackett, his old friend.

Tackett played the re-opening with Landau Eugene Murphy Jr., a jazz singer from West Virginia who had won “America’s Got Talent” in the sixth season. Joining them were the lead singers from The Temptations, The Platters and The Drifters.

Along with the entertainment, James was curious what Tackett thought of the golf course. For a PGA Tour event, the community was probably too small. But they kicked around some ideas, perhaps another area of involvement with the tour.

Tackett mentioned this to the PGA Tour’s marketing staff to keep in mind.

About that time, Sentry was looking to promote its company and its new brand developed by Stephanie Smith, the chief marketing and brand officer. The company logo essentially is quote marks and two blue chairs to show that it talks to customers and listens to what they say.

The wheels were in motion, and Sentry took over as title sponsor in 2018.

Pete McPartland, the chairman and CEO, always knew golf could be a powerful vehicle for relationships, the backbone of his company. That’s one reason why he built a golf course at SentryWorld.

“We had been very quiet from an advertising and brand-building standpoint in the business insurance area,” McPartland says. ”And we felt that the Sentry Tournament of Champions was a fantastic way to assert a new brand identity.”

Monahan still smiles at how it all came together.

He recalls being in the rules trailer at Firestone for the Bridgestone Invitational when he ran into Tackett.

“He said, ‘I just played this gig for an unbelievable company called Sentry’ and they’re interested in talking to us,’” Monahan said Sunday. “We passed that on to Brian Oliver in corporate marketing. When you hear something like this you’re like, ‘Really? Playing where?’ I didn’t even know he was playing in a band.

It was an example of how small conversations can lead to something much bigger.

Sentry is fully invested in Maui, where it donates to the local United Way and with scholarships beyond the net proceeds from the tournament. It started “Aloha Friday” this year, where Hawaiian music was played in the home office in Wisconsin as the views of Justin Thomas and Xander Schauffele and Dustin Johnson were on TV screens in all of Kapalua’s radiance.

And the tour has its longest sponsor commitment for its winners-only start to the year since it moved to Kapalua in 1999.

“It’s just a small world,” Monahan said with a smile.