JOY TO LEWISBURG WITH BOB THOMPSON STARRING LANDAU AND LARRY 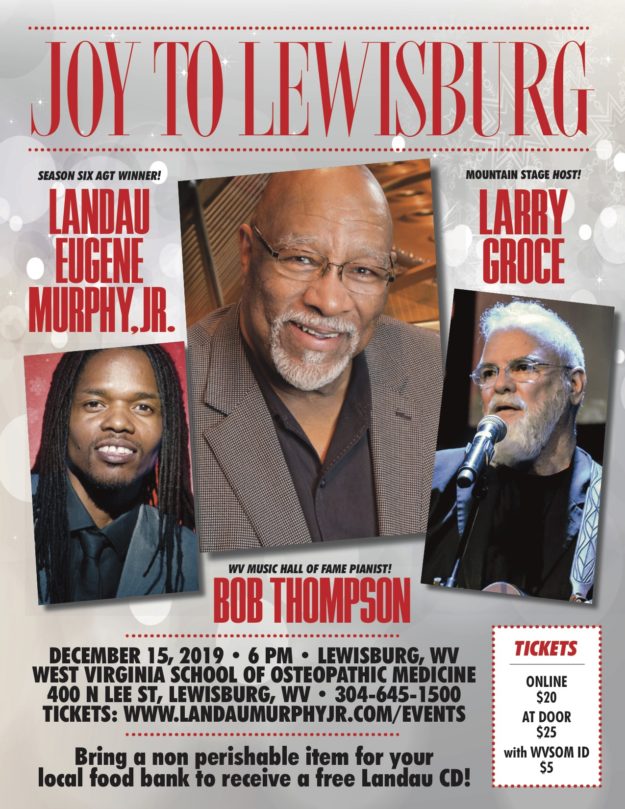 As part of Joy to Lewisburg, Bob and Landau will be joined for the first time on stage by platinum selling and Grammy nominated singer/songwriter Larry Groce.

West Virginia music hall of fame pianist Bob Thompson is perhaps the state’s best-loved musician and ambassador of jazz. He has touched many people’s lives both as an entertainer and a teacher.

Larry Groce is well known to public radio listeners across the country and around the world as the host and Artistic Director of public radio’s long running “Mountain Stage” program, which airs nationally on over 200 radio stations and streams to thousands more fans online every weekend. Larry has released several albums including a collection of best-selling children’s compilations for Disney. He also starred in the cult classic film “Paradise Park” and over two decades later, wrote the music and lyrics for a musical theatre production of the story, which is enjoying its’ second season this summer at Theatre West Virginia.  Larry is slated for induction into the 2020 class of the West Virginia Music Hall of Fame early next year, taking his place alongside friends including Bill Withers, Kathy Mattea, Charlie McCoy and Michael W. Smith. He will be accompanied on stage during the “Landau and Larry Home for the Holidays Tour” by Mountain Stage guitarist Michael Lipton and bassist Ted Harrison from the Carpenter Ants and Larry’s daughter Virginia on viola.