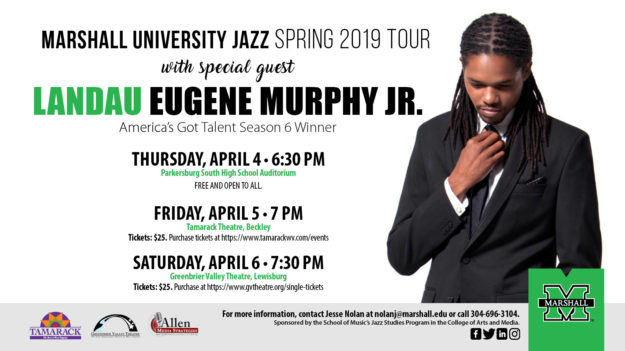 Marshall University’s Jazz Ensemble will go on a mini-tour with guest vocalist Landau Eugene Murphy Jr, April 4-6 throughout West Virginia. Under the direction of Jeff Wolfe, the ensemble and Landau will also present clinics at high schools and perform evening public concerts in Parkersburg, Beckley, and Lewisburg.

The 17-piece big band will kick off the tour with a free concert at 6:30 pm Thursday, April 4, at Parkersburg South High School. The event is open to all.

Next, the band will travel to Beckley, making a stop at Woodrow Wilson High School for a high school clinic, before presenting an evening concert at 7 pm Friday, April 5, at the Tamarack Theatre. Tickets for this show cost $25 and can be purchased in advance online at https://www.tamarackwv.com/events/.

The tour wraps up at 7:30 pm on Saturday, April 6, at the Greenbrier Valley Theatre in Lewisburg. Tickets for this show are $25 and can be purchased in advance online at  https://www.gvtheatre.org/single-tickets.

The Marshall Jazz program has a strong history of teaching jazz, the great, timeless music genre, and turning out world-class jazz musicians. “The members of the ensemble are thrilled to have Murphy joining them on tour”, said Jeff Wolfe, director of the MU Jazz Ensemble. “Not only is he an amazing singer and talent, but he also serves as an example and inspiration to our West Virginia students to not stop following their dreams in pursuing America’s artistic gift to the world —  jazz,” Wolfe said. “I think audiences will enjoy the eclectic mix of music from our top big band, jazz combo, and who knows? We might have a few surprises up our sleeve that folks won’t want to miss.”

“I’m grateful for the chance to be a small part of helping the kids of Marshall University Jazz ensemble succeed, and hopefully inspire these young musical artists to realize that anything is possible”, said Landau who believes in giving back to the community. “Several instructors with Marshall University Jazz group are members of my touring band who always talk about what great young people they have in the program at Marshall and I am honored to support and sing with this young upcoming talent. I will do my best to play for my home state because without support from West Virginians I would never have won America’s Got Talent. I would never have all the incredible opportunities that have been afforded to me”, said Landau, a proud West Virginian and a board member of the Children’s Home Society of West Virginia.

These concerts are sponsored by the School of Music’s Jazz Studies Program in the College of Arts and Media.

About the Marshall University Jazz Ensemble

The MU Jazz Ensemble I is the premier large jazz ensemble in the Marshall University Jazz Studies Program. Over the past year, the MU Jazz Ensemble has performed with world-renowned drummer and band-leader Jeff Hamilton, NEA Jazz Master Jason Marsalis at the Inaugural Huntington International Jazz Festival, and Ellis Marsalis International Jazz Piano Competition, as well as with noted trumpet player and band leader Rob Parton at the 50th Annual Marshall University Winter Jazz Festival. In addition to multiple on-campus concerts each semester, the MU Jazz Ensemble I performs frequently across West Virginia and the Tri-State area, and at regional high schools and jazz festivals.

West Virginia’s own America’s Got Talent winner has performed over 300 sold out concerts across three continents, from Caesars Palace in Las Vegas to the Apollo Theater in New York to the Mercedes Benz Arena in Shanghai and all points in between. His debut CD “That’s Life” on the legendary Columbia Records label hit the top of the Billboard charts, and his follow up CD’s have sold thousands of copies. Landau’s “From Washing Cars To Hollywood Stars” was an Amazon #1best seller, and he completed his first movie role in the film “Choice” released in 2018. A true West Virginia treasure, Landau still makes his home in the southern coalfield town of Logan, where he and his team have helped raise well over a million dollars for children’s, veterans and homeless charities. A board member of the Children’s Home Society of West Virginia, Landau was named one of the United States Jaycees Ten Outstanding Young Americans, and it all started in a very small town with a prayer from a man who possessed a big dream and an even bigger voice. Visit him online at landaumurphyjr.com

Landau on The West Virginia Squares ›