Landau will be performing in Hollywood Monday at the Catalina Bar & Grill!! BUY TICKETS HERE close ×
+ 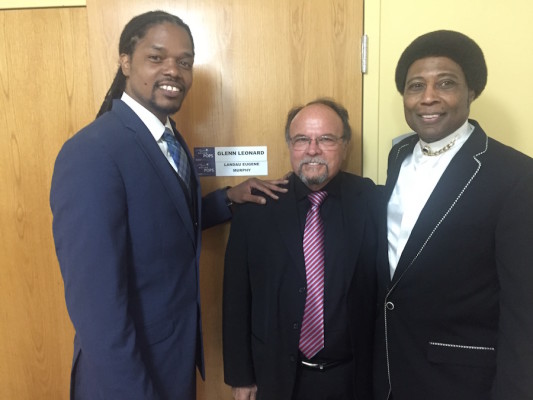 As I got into my car, backed out of my driveway and began my trip to the airport to catch the flight to Boston, I asked myself “Is this really happening?” While going through security at the airport, the feeling struck me that this wasn’t like the other times I had done this same thing; getting on board an airplane to go play a show with Landau. And even though every show is special, this time we would be performing as part of a world class orchestra.

While attending school at Berklee College Of Music and living only two blocks from Symphony Hall, I had walked by the home of the Boston Symphony Orchestra and the Boston Pops Orchestra. Not even once did the thought occur to me that one day I would be blessed with the opportunity to actually perform with them, much less have them play two arrangements I had written for the occasion.

The flight to Boston with a brief layover at Washington Reagan Airport went off smoothly and Landau and I got to our hotel about 11:00 P.M.

We got to sleep in, much unlike Burke, Landau’s manager and Glenn Leonard, formerly of the Temptations, who was also appearing with Landau. They had to catch a 6 A.M. flight from Miami, FL in order to make an 11:30 sound check with the rhythm section.
After grabbing a quick lunch, we reported back in at the hall for rehearsal. The other members of the rhythm section made me feel right at home and it went off without a hitch. At one point during the brief run through of the songs, the Maestro asked Landau how he would like a certain section played and he very graciously said “ Ask my pianist and music director how he wants it.” He could not have paid me a better compliment.
After the rehearsal, Landau and I walked around the Back Bay area, just

taking in the sights and me having flashbacks of the two years I spent here. We later ran into Burke and the three of us treated ourselves to some fine dining, courtesy of the local Wendy’s carryout. Ah, the good life of being on the road.

Day 3 of the trip. The day of the actual performance. This is usually the hardest day of being on the road because basically there is nothing to do but wait. All the preparation for the event is done and you just hang at the hotel in your room until the car comes to pick you up to take you to the venue.

And my expectations for the day were right on target. A long day of waiting and finally the time arrives to meet in the lobby of the hotel and take the short ride to Symphony Hall where we are greeted at the door by our hostess who escorts us to the dressing rooms downstairs for a little more waiting. After about a half hour of jokes and stories from Glenn about life on the road with the Temptations, we are taken upstairs to our respective stage entrance areas, where we can actually watch the orchestra playing, via closed circuit TV monitors. Finally it is time to take the stage and the conductor gives us the downbeat. After the eleven bar intro by the orchestra, the bass players begin the signature opening to My Girl, and the crowd erupts in applause. I again had to ask myself if this was really happening. We closed out our portion of the concert with Ain’t Too Proud To Beg, with the audience giving a thunderous applause when Landau and Glenn did some fancy “Temps” footwork, and then on the final chorus……well, let me just say that I am not completely sure, but I would bet that Landau just might be the only singer to do the “Moonwalk” on the stage of Symphony Hall.

Up early to pack for the trip home. We meet in the lobby mid morning to catch our respective flights at Logan Airport. Landau, Glenn and I leave for the airport with Burke due to leave a few hours later. We had heard several good reports about the concert and are looking forward to the return trip to the Tanglewood location in September and another opportunity to work with the Pops. Our return trip was without any problems or delays, the only panic moment being when I was standing in the parking garage at Yeager Airport, not having a clue where my car keys were. Again I say, “ Ah, the good life of being on the road.”