Dickens, the Country Music Hall of Fame member and long-standing member of the Grand Ole Opry, passed away in 2015. In a career that spanned over across eight decades, Bolt WV native Dickens, nicknamed “Tater,” released dozens of humorous novelty songs and was almost as well known for his jokes as his music. Dickens was close friends in his later years with fellow West Virginia country music superstar Brad Paisley, who often featured Dickens in his music videos and in joint performances together at the Grand Ole Opry.

Landau was joined by Grammy award winning engineer and producer Don Dixon for the recording session, where Landau said he had a blast singing “Little” Jimmy Dickens’ biggest hit “May The Bird of Paradise (Fly Up Your Nose).”

“It’s just such a fun song, and way outside what I would normally get to sing. I really appreciate Michael and the Hall of Fame for even considering me to be a part of this,” said Landau after wrapping up the session. No release date has been set for the album.

Landau jets off to Miami Beach for his next concert appearance, and will return just in time for the West Virginia Music Hall of Fame’s fifth annual “Garden Party” on Sunday May 29 at Café Cimino in Sutton, where he will close the evening backed by some of West Virginia’s best musicians.

This year’s event pays tribute to the career of West Virginia pedal steel great Gary Boggs. In addition to playing with country legends George Jones, Connie Smith, Hank Williams Jr., and Vern Gosdin, Boggs led the popular Southern Mix band for many years. His son Billy – who cut his teeth playing with his dad – will be performing with Southern Mix, featuring Russ Hicks on pedal steel. Christopher & Alasha (from Qiet fame) will also perform. The evening will close out with a rock ‘n’ soul set by West Virginia’s America’s Got Talent winner, members of Landau’s band, and The Carpenter Ants.

Proceeds will support the WV Music Hall of Fame’s Traveling Museum, an ongoing project that has visited more than 500 schools and reached more than 16,000 students.

Listen to a smorgasbord of homegrown, West Virginia music; feast on Café Cimino’s award-winning buffet; and quench your thirst with an open beer and wine bar. Garden Party V is from 3pm-9pm. Tickets are $65 in advance, $75 at the door, and are partially tax deductible. For more information and to reserve your tickets, visit www.wvmusichalloffame.com or call Cafe’ Cimino at (877) 924-6466 or the West Virginia Music Hall of Fame at (304) 342-4412. 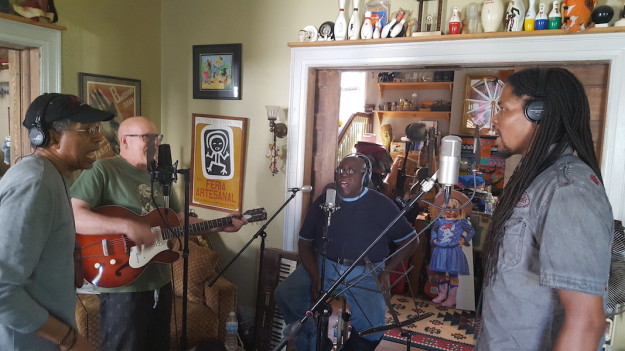 ‹ Landau to Perform Twice This Summer with the Legendary Boston Pops