Riffing, but Not on the Rules of Golf

Read this article online at NewYorkTimes.com.

Riffing, but Not on the Rules of Golf

By KAREN CROUSE FEB. 27, 2015
PALM BEACH GARDENS, Fla. — Ken Tackett had a stick in his hand and was lost in his art. Using an extension holder containing a can of red spray paint, Tackett, a PGA Tour rules official, drew meticulous lines around hazards in preparation for a tournament round.

The work is a decided departure from his prior career as a jazz drummer, during which he kept owls’ hours. This past week at the Honda Classic, Tackett’s days have begun before the first light. While golf and jazz would seem to be as different as, well, night and day, Tackett said they were not.

“There’s that one shot that brings you back in golf, and it’s the same in music,” Tackett said. “There’s that one-hour set where you have four or five people on the stage and you’re all going to the same place and it’s unexplainable.”

In jazz, Tackett said, the drummer shapes the path that the musical composition takes. In his capacity as a rules official, Tackett sets up the courses, thereby influencing how the golfers play the tournament rounds. 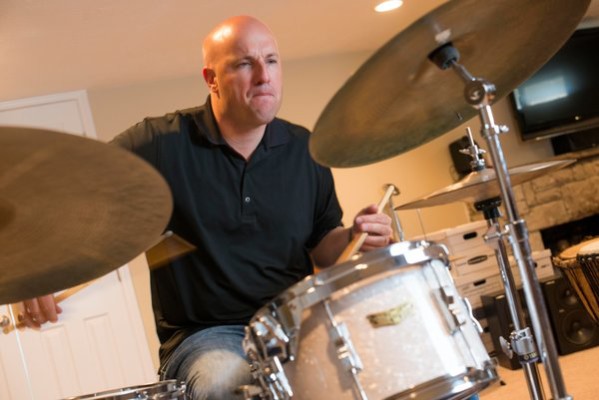 A native of West Virginia, Tackett played golf in high school before earning his degree in jazz studies from the University of North Florida. Credit Ty Wright for The New York Times

And while golf is bound by rules, and jazz by guidelines, there is room for interpretation. At last year’s Honda Classic, Tackett was summoned by Davis Love III, whose ball landed in a bed of ants near the base of a tree. Love asked if he was entitled to relief. If he could positively identify the insects as fire ants, Tackett told him, the answer was yes.

Tackett might have been talking about a round of golf when he described jazz music as “a very complex river, but who knows where it’s going to flow?”

A series of converging channels carried Tackett, 40, to the PGA Tour. A native of West Virginia, Tackett played golf in high school before earning his degree in jazz studies from the University of North Florida. In his final college performance, attended by his parents, his father turned to his mother and whispered, “So we sent him to school for this?”

Tackett laughed as he told the story, relayed to him by his mother well after the fact. His parents were unfailingly supportive, Tackett emphasized, even if they did worry that “starving musician” might be redundant.

After gaining a foothold in the industry playing in various bands, Tackett tried out for the Noel Freidline Quintet in 1996. His audition took place during a live radio performance at a Jacksonville mall. The acoustics were so bad, Tackett despaired of keeping time with the other band members. As far as challenges go, it was like hitting a blind shot to a turtleback green.

“We threw him to the wolves,” Freidline said in a telephone interview. “He was sweating pretty good. I kept telling him: Don’t worry, man. You’ll hear it.”

And he did. “He has an innate sense of power,” Freidline said of Tackett, who won the job and moved with the group to Las Vegas when it was hired to play at the Bellagio hotel and casino’s jazz lounge.

The band appeared in “The Legend of Bagger Vance,” a 2000 film, which included a close-up of Tackett playing a vibraphone. Scenes of the band shot for “Ocean’s Eleven,” in 2001, ended up on the cutting-room floor.

Only once, Freidline said, did Tackett show signs of nerves. The band was in the middle of a set at the Bellagio when the jazz drummer Roy Haynes walked in and was seated at a table. “It was like Michael Bublé singing and Frank Sinatra walking through the door,” Freidline said, laughing.

Haynes, who played alongside jazz giants like Miles Davis, Sarah Vaughan and John Coltrane, is Tackett’s favorite drummer. With his heart beating in three-four time, Tackett finished the set, then met Haynes.

After the terror attacks on the World Trade Center and the Pentagon in 2001, the music stopped for Tackett. Taking stock of his life, Tackett, whose wife, Tammy, was pregnant with the first of the couple’s two children, left the band and moved back to West Virginia to be close to family.

He was working as a car salesman when he ran into a friend from his junior golf days who suggested he apply for a job with the West Virginia Golf Association. Tackett was hired by the organization in 2003 and spent the next 11 years applying the organizational and people skills that had served him well in music to the golf business before being hired by the PGA Tour.

Freidline was not surprised that Tackett’s postmusic transition was so seamless.

“Ken’s got this really great ability to take a genuine interest in everyone around him,” he said. “He immediately builds rapport with people. People trust him.”

Though he traded one itinerant lifestyle for another, Tackett has not forsaken his roots. He does what he can to spread the gospel of music to school-age children in West Virginia, and when his schedule permits, he plays with Freidline or any other group that will have him.

“I have the best of both worlds,” Tackett said.

Like the pieces of music he once memorized, Tackett knows the rules of golf backward and forward. But it is his personality that sets him apart, said Mark Russell, a vice president for rules and competitions for the tour.

“There are plenty of people who know golf rules,” he said. “We need people who can win people over to their thinking in a nice way.”

Anybody who could find his voice to talk to his idol, Haynes, or treat the actor Andy Garcia like just another pianist when Garcia joined the band for a number at the Bellagio is not going to be cowed in an interaction with Tiger Woods. So that’s another of Tackett’s strengths.

“He will not be at all in awe with any of the top players,” Russell said.

During their downtime on the course, Russell said, he and Tackett often talk about their shared obsession: Bob Dylan.

“You can never exhaust that subject,” Russell said. “It’s almost like golf.”

‹ Home for the Holidays with WVSO