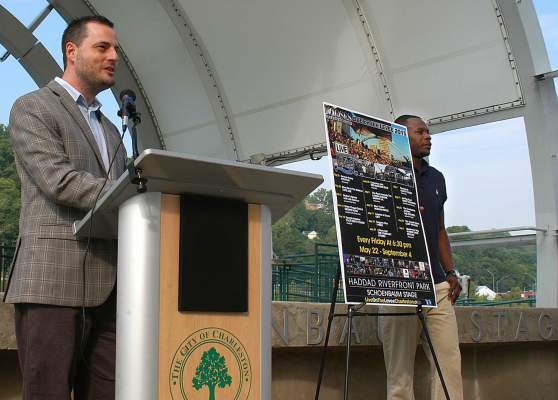 Velvet-voiced crooner and Logan County native Landau Eugene Murphy will be one of the headline acts at Charleston’s free Live on the Levee music concerts this summer.

Live on the Levee music committee chairman Adam Harris announced the lineup for the annual concert series at a press conference Friday morning at Haddad Riverfront Park. The schedule includes 11 acts returning to the riverfront stage and nine national acts.

The free concerts are the brainchild of City Councilman Tom Lane, who suggested the series as a way to bring people downtown. Live on the Levee is now in its 12th year.

“Thirteen years ago, if you’d have come down here on a Friday night do you know what you’d have found?” asked Mayor Danny Jones. “Nothing.” He said Live on the Levee is now one of downtown’s most popular events.

Harris said more than 100 performers were considered for the concert series this year, but there were only slots for 31. There are 16 weekly concerts this year.

Murphy, winner of “America’s Got Talent,” will headline the concert on the Fourth of July weekend, joined by the Ryan Kennedy Trio.

Charleston City Manager David Molgaard said a new smartphone app is being added for this year’s event so residents can check their phones to see whether the concerts are being canceled for bad weather. The app is charlestonwvmobile, he said.

Information about the concerts will also be available online at www.liveontheleveecharleston.com.

Event emcee Jim Strawn also said concert organizers are experimenting this year with local FM radio broadcasts to allow boaters to hear the concert up and down the Kanawha River. Radio frequencies for the music feed will be announced before each concert.

Live on the Levee kicks off May 22 and runs through Sept. 4.

May 22 — Groove Heavy and Stratus

May 29 — Meet Me In the Matinee and Tape Age

July 17 — Coyotes in Boxes and Qiet

July 31 — A Story Told and The Company Stores

Aug. 21 — The CharlieWest All-Stars and The Esquires

‹ NBA Playoffs WAS vs ATL Game 6