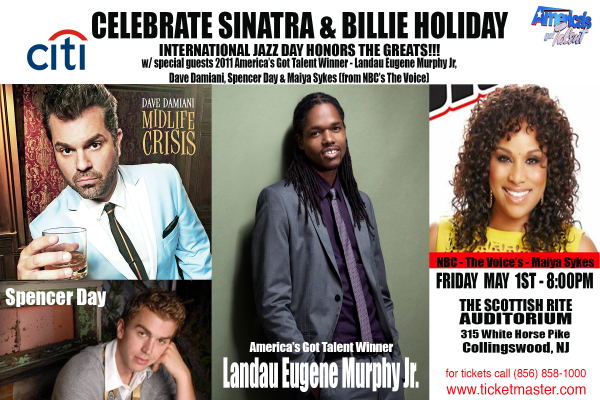 Landau Eugene Murphy Jr. will co-headline a very special “Centennial Salute To Sinatra and Billie Holiday” Friday night May 1st at the Scottish Rite Auditorium in Collingswood, NJ, in suburban Philadelphia. The one-night-only concert event will feature several of the world’s most popular young artists performing all-time classics from the Great American Songbook today, including:

-Dave Damiani and his No Vacancy Orchestra, supporting their new CD release “Midlife Crisis.” Damiani is a Collingswood native now living and recording in Los Angeles.

– Spencer Day, whose “Til You Come To Me” was the top rated song on 2010 year-end Smooth Jazz Top 20 Countdown, the first time a vocalist earned that honor.

– Maiya Sykes from NBC TV’s The Voice, known for her charismatic presence on television and her soulful renditions of timeless classics by Billie Holiday and others.

“We feel honored to salute Frank Sinatra in his home state of New Jersey.  If you’re a fan of Frank, Billie Holiday and the Great American Songbook, don’t miss this great night of timeless music,” said Landau, who just wrapped up recording sessions for his third album at Hollywood’s Wonderworld Studios.

The Scottish Rite Theater is located at 315 White Horse Pike in Collingswood, NJ. Tickets are available at the Scottish Rite box office, by calling (856) 858-1000 and also online at Ticketmaster HERE.