Symphony attracts largest crowd of the year with Landau 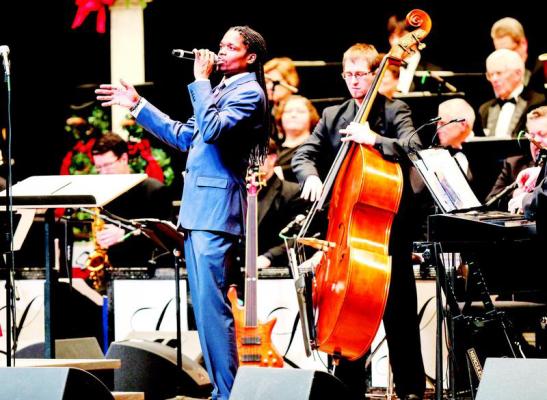 Sholten Singer/The Herald-Dispatch Landau Eugene Murphy Jr. and his 2014 Murphy and Motown Christmas Tour join with the Huntington Symphony Orchestra for a performance on Saturday, Dec. 20, 2014, at the Keith-Albee Theatre in downtown Huntington, W.Va.

The jazz singer from Logan, West Virginia, turned “America’s Got Talent” winner brought along special celebrity guests Glenn Leonard of the Temptations, Joe Coleman of The Platters and Joe Blunt of the Drifters for the show at the Keith-Albee Performing Arts Center.

Together, they have been touring the country to promote Murphy’s holiday album, “Christmas Made for Two,” on the Murphy and Motown Christmas Tour, which kicked off Dec. 5 in his hometown.

Hogan Haas, CEO and executive director of the symphony, said Saturday’s concert was nearly sold out, not a big surprise given Murphy’s track record with the symphony. In August 2013, he helped sell out a performance at the symphony’s Picnic With the Pops at Harris Riverfront Park.

“This is our largest indoor concert ever,” Haas said, adding that it was the first symphony concert for many in attendance. “I know they’ll come back after they see this. It’s a great show. We have a huge orchestra, a 65-member orchestra, one of the largest ones we’ve ever had, and [Murphy] goes out into the audience and you can’t help but love it.”

The special holiday-sized symphony was directed by Kimo Furumoto and they performed everything from “Get Ready,” and “The Way You Do the Things You Do,” to “O Holy Night,” “I’ll Be Home for Christmas,” “My Girl,” and the symphony’s traditional last song “We Wish You a Merry Christmas.”

Gail Vance, of Ona, attended the show with six of her girlfriends. It was her first time seeing Murphy in concert.

“I’ve just seen him at the mall and was very impressed,” she said. “But this is Christmas music and I love symphonies. It’s just good, quality music.”

Murphy has been on the musical ride of his life since he won season six of NBC’s “America’s Got Talent,” $1 million, and a Columbia Records contract in September 2011.

He said in an interview with the Herald-Dispatch earlier this week that he is just having fun with it and wanting everybody else to have fun with it was well.

“It is not just my show; when you buy a ticket it is our show and we all become one and part of that special moment from the little kids to the great-grandparents who are there,” he said.

Murphy said his 2014 Murphy and Motown Christmas Tour has already been special as he got to kick it off in his beloved hometown of Logan with a holiday charity performance at the Coalfield Jamboree Theatre.

The Huntington concert also had a charitable aspect to it, as the symphony handed out $500 worth of tickets earlier in the week to children at local community centers.

The donation was made possible through the symphony, as well as the Maudella Taylor Endowment administered by the Foundation for the Tri-State Community.

The symphony will return to the Keith-Albee on March 7 for “A River Runs Through It,” with Beethoven’s programmatic “Pastoral” symphony. Tickets are available by calling 304-781-8343, stopping by the symphony office at 763 3rd Ave., Huntington, or online at www.huntingtonsymphony.org.