HSO, Foundation team up to give kids symphony tickets

HSO, Foundation team up to give kids symphony tickets 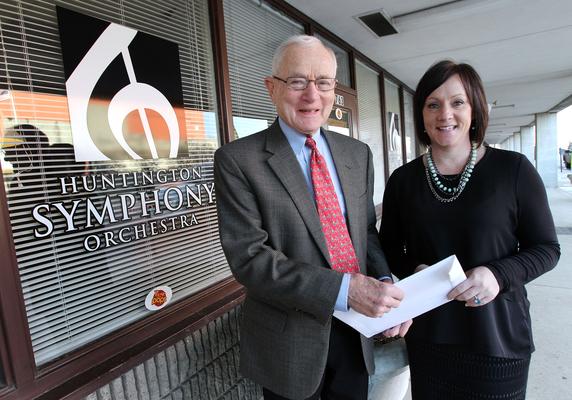 Lori Wolfe/The Herald-Dispatch | Huntington Symphony Orchestra Board of Trustees President Dr. Maurice Mufson gives free tickets for Saturday’s performance to Alissa Stewart, executive director of Goodwill Industries of KYOWVA, on Tuesday, Dec. 16, 2014, in Huntington. The tickets will be distributed to youth at the J.W. Scott Community Center, operated by Goodwill Industries of KYOWVA, and the A.D. Lewis Center.

On Tuesday, Hogan Haas, executive director of the Huntington Symphony Orchestra, was over at a couple Huntington community centers to help hand out about $500 in tickets for Saturday’s concert.

The donation of tickets was made possible through the HSO as well as through the Maudella Taylor Endowment administered by the Foundation for the Tri-State Community.

Youth from the J.W. Scott Community Center, operated by Goodwill Industries of KYOWVA, and the A.D. Lewis Center will be able to attend Saturday’s Huntington Symphony Orchestra event at no cost.

“I’m very thankful that the Foundation for the Tri-State Community and the Huntington Symphony Orchestra recognize that all individuals need to have an opportunity to experience the arts,” said Alissa Stewart, executive director, Goodwill Industries of KYOWVA.

Haas said the gift is a great way to kick off a busy week leading up to the concert called “A Hometown Holiday.” The concert at the historic Keith-Albee Performing Arts Center features 65 HSO members under the direction of Kimo Furumoto.

Special guests will be Murphy, his 11-piece big band, and his tourmates, special celebrity guests Leonard, Coleman & Blunt, the former lead vocalists of the Temptations, the Platters, and the Drifters, who have sold more than 100 million records worldwide and scored dozens of No. 1 hits.

Some tickets remain for the concert. Tickets are $20 for balcony, $35 for orchestra level 2, $50 for loge and orchestra level one and $65 for VIP. They’ll perform everything from “Get Ready,” and “The Way You Do the Things You Do,” to “O Holy Night,” “I’ll Be Home for Christmas,” “My Girl,” and the HSO traditional last song “We Wish You a Merry Christmas.”

Haas said Murphy is back by popular demand following his sold-out August 2013 performance at the symphony’s Picnic With the Pops.

Haas said the symphony, which brought in The Lettermen last year for its Christmas concert, knew they had to reel back in Murphy when he announced a December Christmas tour run that started in Logan. The concert includes his big band (made up entirely of regional musicians and many Huntingtonians, including band-leader Mark Smith).

“It’s very simple; he was the biggest Pops draw that we have ever had and he is just such a crowd pleaser,” Haas said. “You can’t help but love the man when he leaves.”

That feeling of love is mutual for Murphy, who won season six of NBC Television’s “America’s Got Talent,” $1 million and a Columbia Records contract in September 2011.

“I am just having a lot of fun with it and I want everybody else to have fun with it,” Murphy said of his show. “It is not just my show; when you buy a ticket it is our show and we all become one and part of that special moment from the little kids to the great grandparents who are there.”