Landau will be back in Las Vegas on September 24th and 25th to perform at the famous Smith Center! BUY TICKETS HERE close ×
+

This story is available online at WilliamsonDailyNews.com 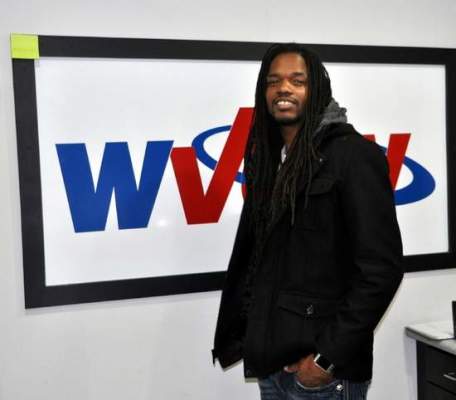 Kyle Lovern/WDNLandau Eugene Murphy, Jr. is pictured in the studios of WVOW radio after recording a public service announcement. Landau, a Logan native, will kick-off his nationwide tour in his hometown Dec. 5th.

LOGAN – Landau Eugene Murphy, Jr. strolled humbly into the studios of WVOW radio in downtown Logan, with his signature dreadlocks, right on time for his 4:00 o’clock interview.

A lot has changed for the crooning performer who won America’s Got Talent back in 2011. Before heading to New York to audition for the reality show, Landau was washing cars at a local car dealership and bussing tables at local restaurants to make ends meet. He had to borrow money to take that fateful trip to New York.

He is still the down to earth, southern West Virginia guy, but naturally things are different for him these days.

“I personally haven’t changed, but my life has,” Landau said. “With being on the show I’m definitely recognized.”

Murphy was wearing a modest hoody with a nice black jacket to protect himself from the unseasonably cold temperatures.

The Sinatra style vocalist received national attention for winning the sixth season of the NBC reality show America’s Got Talent (AGT). Fans now come up to him and ask for an autograph or to take pictures with the soulful singer. This is something he has had to get used to.

“A lot of people just want to talk to me and tell me how many times they voted for me,” Landau said of his life-changing appearance on AGT. “I appreciate it all and it is very humbling.”

Many remember watching the show when he first came out onto the stage. He was nervous, chewing gum. When one of the judges mentioned it, he put the gum in his jeans pocket.

Then he simply blew the judges away with his first performance of “I Got You Under My Skin.”

He shed tears of joy when judge Howie Mandel told him his “life would never be the same” after that first audition.

The rest is history as Landau went on to win the popular reality show on September 14, 2011.

“I’m thankful for all of the blessings I’ve had,” Landau said.

Landau, known as ‘Dooney’ by his close friends in the Logan area, is now making a living doing what he loves – singing to audiences at a variety of venues.

He is literally a rags to riches story, but Landau is giving back. He participates in a variety of charitable drives and organizations around Logan County and southern West Virginia.

Every holiday season, Landau is dedicated to helping hometown charities. His tour kick-off show in Logan is no exception. Some of his charities include The Salvation Army, Logan High School Prayer Club’s Canned Food Drive, and the Matt Patterson Christmas Toy Drive. He has also done events for Hospice in the Charleston area.

Landau’s life has changed a lot in the past three years.

He went from singing in local venues in Logan to performing as a headliner in Las Vegas and other locations across the U.S.

“I want to give back,” Landau said, about how things have changed in his life. “There are always good causes out there. It should be an all-around year thing. I’ve been blessed and I’m trying to be a good humanitarian. Hopefully it will rub off on others who can give back.”

He can relate to being down on his luck. At one point in his life, Landau had been homeless at age 19, sleeping in his car.

Landau knows that the economy is really in dire straits for the coalfields. Many miners are laid off and families are finding it tough to make ends meet.

“Murphy’s father was a coal miner. His parents divorced when Murphy was 8-years old. He then moved with his mother and his two brothers and two sisters to Detroit, Michigan. He dropped out of school in the 11th grade to take care of his family.

“I just hope I can spread some joy, especially through the holiday season,” he added, “and throughout the rest of my career. That is something I should have been doing anyway, regardless of my situation.”

WHAT IS NEXT FOR LANDAU

After his first CD “That’s Life”, he released a Christmas album last year, “Christmas Made For Two.”

Half of the proceeds from that holiday release went to the Children’s Home Society of West Virginia.

He will be launching a nationwide tour at the Coalfield Jamboree in Logan on Friday, December 5. Before the performance he will be the Grand Marshall in the Logan Christmas parade.

“Kicking it off in Logan will really be fun,” he said. “You’re in front of your hometown and the people who know you.”

“It’s funny to look out in the audience and see people who you know and live around. It’s like family and they’re watching you do your show – that’s amazing,” Landau said with a wide smile.

After that it will be shows back to back at several locations.

Landau will be performing hits from his Billboard No.1 ranked debut CD and his follow up holiday release.

He is currently working on a third album.

“I am working on the third one,” Landau said with a smile. “We are working out some kinks.”

This new CD will have some original songs, as well as going back to the Sinatra style that has made him famous.

“I throw some curves in there,” he stressed. “It will be interesting when people hear it. I can really get into it.”

There is no release date, but Landau hopes it will be out in the spring.

Hollywood beckons too and Landau has been talking to some producers about appearing in a movie.

Landau is also working with some local singers and rappers and helping them produce a CD.

“I’m helping some of the guys I grew up with,” he said with a laugh. “Doing some rapping and singing – it’s going to blow people away when they hear it. I’m really looking forward to that. There is so much talent in West Virginia. I’ve been around it for a long time. I have a nice little circle of people who are ready to pursue their career.”

Landau wants to help them fulfill their dreams.

He has people listening to his style known now as “Great American Songbook” music. That was a popular term that refers to the genre of music from performers like Frank Sinatra, Dean Martin and others. It was influenced by the jazz, big band and swing styles of that era.

“I want to continue to bring back memories for the grandparents out there and also share that music with the younger generations,” Landau added. “You’ve just got to really love it – it’s a package – I try to bring those emotions into those songs. There are some great lyrics, but you have to sing them like they were meant to be sung.”

“It’s a part of a team, with the band and everyone coming together,” Landau said of his sound. “You need to connectwith the audience. It’s all fun and I want to continue to do that.”

One release Landau had in the past, when things weren’t always going so well, was playing basketball. He played in church leagues and pickup games.

“Basketball was the only thing that got me out of the house and kept me going,” he recalls.

He still likes to get out and hit the hardwood when time permits. His hectic schedule will not allow him to play as much as he would like.

He performed in LasVegas and had other stops at the historic Apollo Theatre and the DTE Energy Center in Detroit. He has performed with former members of The Temptations and Platters, and has headlined appearances in his home state of West Virginia and across the nation.

He made a Super Bowl appearance, had a televised performance at The Hollywood Christmas Parade and a string of sold out headlining shows across the U.S.

He also had the television talk show tour which included The Today Show, Anderson Cooper, The View, The Talk, The Wendy Williams Show, Fox and Friends, CNN, The Tom Joyner Show, Scott and Todd on WPLJ, Good Day LA, and many more.

He has also sung the National Anthem at Madison Square Garden and at WVU’s Mountaineer Field, prior to a West Virginia University/LSU football game, and also at several other public events.

(Kyle Lovern is the News and Sports Editor for the Williamson Daily News. He can be contacted at klovern@civitasmedia.com or at 304-235-4242, ext. 2277 or on Twitter @KyleLovern.)