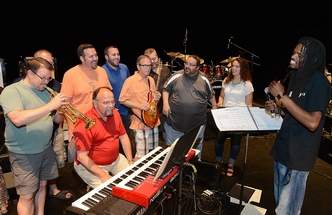 Landau Eugene Murphy Jr. had a choice after winning the “America’s Got Talent” contest in 2011: continue his full-throttle career in a city with a major entertainment scene like Las Vegas, New York City or Los Angeles, or keep his home and business base in Logan, West Virginia.

He chose West Virginia.Not only did he choose to stay in West Virginia, Murphy decided to hire as many local musicians for his band as possible. A remarkable number of them are music educators in the state.“Oh, at least a dozen of the band members have ties to music education,” said Burke Allen, of Allen Media Strategies in Washington, D.C., Murphy’s manager, and another native of Logan.

“We sort of got the cream of the crop of musicians for his band, and he’s learned so much from them.”

Murphy agrees that he has an amazing band and says that he is on a mission to promote music as being good for the mind and the soul.

“I think music moves the world, and if we move it in the positive direction through music and education, we can make the world a better place,” Murphy said during an evening rehearsal for his June 18 concert at the Clay Center, which benefited and celebrated HospiceCare’s 35th anniversary.

The rehearsal was busy and energetic as the group rehearsed with Murphy’s special guests — the former lead vocalists from The Temptations (Glenn Leonard), The Platters (Joe Coleman) and The Drifters (Joe Blunt) — and previewed songs from his upcoming third album, slated for release later this year.

The camaraderie with his band members was obvious as they bantered playfully during the practice session. Brandon Willard joked that he has known Murphy so long that he knew him before he had dreadlocks.

Willard, a Shinnston native and West Virginia University graduate, is director of bands at UC, director of Kanawha County Schools’ Magnet School of Music and lead teacher and music specialist for the Kanawha County Board of Education, primarily at Mary C. Snow Elementary School. Prior to that, he served as band director at Logan High School.

When asked how he manages his teaching jobs with playing in Murphy’s band, Willard responded, “Very carefully,” with a broad smile. 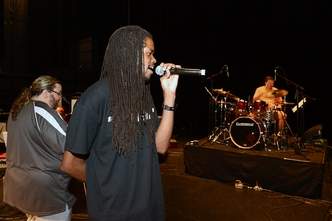 “I have great leadership at my school and at the board office. It’s a great opportunity for me to play in Landau’s band. Landau has come to my school to talk to the students. He’s very active and does a lot with students and he wants to do even more. It’s tough to juggle the jobs, but my job is a lot of fun. I love teaching the younger students and being able to let them experience what I do as a musician.

“I tell my students, you’ve got to follow your dream and be prepared to work hard. I tell them to do something that they love and they will do it better if they love it. I also tell them, never be afraid to dance,” Willard said.

Martin Saunders is the director of jazz studies and professor of trumpet at Marshall University in addition to being Murphy’s lead trumpeter. He has three degrees in music, including a doctor of musical arts from the University of Oklahoma.

“A lot of what I do with teaching is, I’m teaching them how to be in a real-life musician situation and I try to practice what I preach. Being in the band, this is my fun. This is my release,” Saunders said of his life as an active jazz performer in addition to being a teacher.

He has performed with other highly regarded entertainers such as the Cab Calloway Orchestra, The Temptations and Frank Sinatra Jr.

Marty Ojeda plays tenor saxophone and flute in Murphy’s band. When he’s not touring with Murphy, he is the band director at Logan High School.

Prior to joining Murphy, he spent eight years as a touring musician in Nashville, playing with artists such as Rascal Flatts, Brenda Lee, T. Graham Brown, The Bellamy Brothers, The Temptations, Bobby Vinton, Gladys Knight and opening for music stars Merle Haggard, Lonestar and Alan Jackson.

“I had been a road and studio musician for many years, and I found out about the job at Logan High School, my alma mater, and decided, since I had a child, it was time. Landau and I had heard each other play and we both said, ‘Hey, let’s play together. We both know Bob Noone,’” Ojeda said, referring to a Logan lawyer who works closely with the Children’s Home Society of West Virginia, a group Murphy supports.

Ojeda said managing teaching and being in Murphy’s band is a challenge he enjoys.

“You pick and choose and juggle, and the main thing is my students. I try to do as much as I can to teach my students by example. I tell them and show them, if you obligate to something, you have to fulfill that obligation,” he said.

“As musicians, our first priority is our day job, so to speak, and the band is very understanding of this,” Ojeda said.

Mark Smith is the leader of Murphy’s big band and plays keyboards in it. He also teaches piano and voice, and directs theater at Marshall University.

When asked how he juggles all his jobs, he replied, “Thankfully it’s summer break.”

He also got backup singing jobs for two of his students at Marshall: Mycah Pemberton and Jen Billups.

“We needed strong backing vocals to add to what we were doing here, and I happened to know two really good people. This is their seventh show and, like the rest of the band, they work hard,” Smith said.

His advice to students and musicians wanting to work in the music industry is simple: “You’ve got to start by doing show after show. Take any gig you can get, and don’t turn down the job because the pay is low. You’ve got to pay your dues,” Smith said. 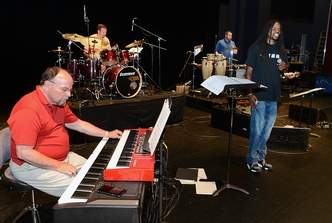 “It’s a small world regarding the musicians in the band and their connections to Landau, who we all admire,” said Willard, who was once in the Daddy Rabbit Band with Murphy’s close friend Noone.

These ties have led to a close-knit group of musicians who share Murphy’s dedication to making the world a better place, particularly for children and often through charity events.

Earlier this month, Landau donated $5,000 to the charity.

Murphy’s second album, “Christmas Made for Two,” had a special limited-edition release benefiting the Children’s Home Society, a cause he has supported for the past decade.

In April, Murphy performed a concert to benefit the Spring Mills Student Choir in Martinsburg.

During his December concerts, he collected food donations for the Morgan County Backpacks Project, toys for the Friends and Family for Coal Christmas Toy Drive, and donated proceeds of a concert to the West Virginia Council on Aging.

Earlier this year, Murphy was named to the 2014 Ten Outstanding Young Americans program by the U.S. Jaycees. He was to be honored at a black-tie awards ceremony last night in Baltimore. For 76 years, the organization has recognized 10 young men and women under the age of 40 who best exemplify the finest attributes of America’s youthful achievers. Previous honorees include John F. Kennedy (1946), Robert Kennedy (1954), Chuck Yeager (1954), Jay Rockefeller (1969), Elvis Presley (1970) and Bill Clinton (1979).

“Every opportunity that Landau gets to shine a positive light on West Virginia, he does it. This award just took his breath away, and he is very honored,” Burke said.