Get Muddy with Murphy!

(Charleston WV)  America’s Got Talent winner Landau Eugene Murphy Jr. is teaming up with the Riverside High School Warrior Marching Band to raffle off a brand new Coleman Trail Tamer 500 ATV.  But most exciting for fans of the America’s Got Talent winner is that Landau will spend the day exploring the Hatfield McCoy Trail System with the grand prizewinner!  The “Get Muddy With Murphy” package also includes complimentary trail passes and overnight lodging in the beautiful mountains of Southern West Virginia near the trail head, provided by the Hatfield & McCoy Convention and Visitors Bureau.  Raffle tickets are available at www.rhswarriorband.com or by calling (304) 415-4966.

So, what’s the connection with Landau and the students at Riverside High in Kanawha County, just outside Charleston?  The school’s Band Director Bruce Mullins has been a part of “Team Landau” from the very first national tour date after Murphy’s 2011 America’s Got Talent win.  “Because of my music organization background, I was asked to help with the musicians in the big band.  I also started to spend a lot of time with Landau when I was asked to assist with his security, which turned out to be pretty easy, because the most dangerous thing that happened was that fans wanted to hug him…and not let go!”

Now, two and half years later, the Kanawha County educator is still working with “Team Landau” as the Merchandise Manager, overseeing sales of CD’s, T-shirts and other items during tour stops and on Landau’s web store, along with Mullins’ main focus of teaching students the musical ropes in the Riverside High School Warrior Marching Band.

So, when he casually mentioned to Landau’s manager Burke Allen that Riverside students were in desperate need of new band uniforms, Landau quickly stepped in to help.

“Anything I can do to help these kids play music and live their dreams the way I’ve lived mine, I’m happy to do,” said Murphy from his home in Logan, WV in the heart of the Hatfield-McCoy trail system.  “Plus, I love how much good this trail system has brought to Southern West Virginia, and Debrina Williams from the Hatfield & McCoy Convention and Visitors Bureau has been a great friend and a big supporter of mine since way before I won America’s Got Talent.  I’m excited to go riding with the winner!”

Since winning America’s Got Talent, Murphy has released two best selling CD’s and has completed tracks for a third.  He’s also toured across America, Europe and Asia and has helped raise hundreds of thousands of dollars for charities in his home state of West Virginia.

More details on the Riverside High School Warrior Marching Band raffle prize package and the Coleman ATV are available at www.rhswarriorband.com.  You can learn out more about the Hatfield-McCoy Trail System at www.trailsheaven.com and the Hatfield & McCoy Convention and Visitors Bureau at www.hatfieldmccoycvb.com. 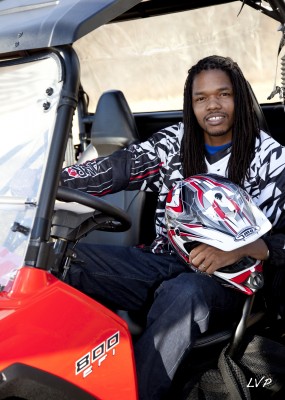 Murphy Set to Perform at Tamarack ›