A concert of West Virginia’s Finest! 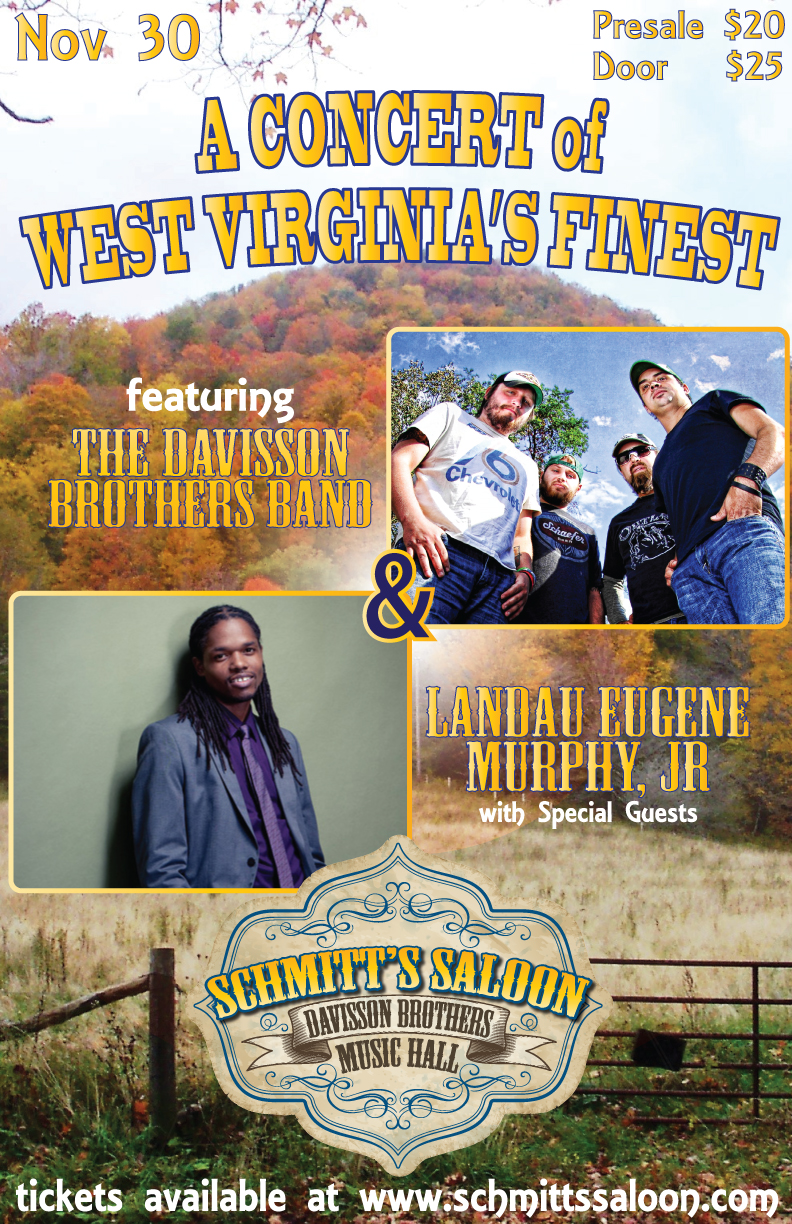 Head to Schmitt’s Saloon next Saturday night, November 30th after the WVU vs. Iowa State football game for a night filled with music and fun! Located at 245 Cheat Road in Morgantown, just miles from the West Virginia University campus.

Get your tickets HERE

Bring a Christmas toy to the show, and receive a backstage Meet and Greet pass to meet Landau and DBB!

The Davisson Brothers Band has perfected an exclusive sound that intertwines a sensational blend of country, bluegrass, and gritty southern rock & roll. Leaving crowds and fans spellbound at big-time events such as DelFest, Jamboree in the Hills, and working professionally with musical legends such as the Charlie Daniels Band, the Davisson Brothers Band has proved to be an unstoppable, thrill-inducing force to be reckoned with.

The Davisson Brothers Band has swiftly gathered an ever-expanding fan base spanning the Eastern U.S. with their tenacious vocals and energetic live shows. Capturing their rugged, boot-stomping sound in their first single “Big City Hillbilly” and rowdy Mountaineer fan-favorite “Here Come the Mountaineers,” the band has gained notoriety through proving to devout fans they are more than an act – the Davisson Brothers Band represents a way of life.

While playing as many as 300 shows a year, opening for big-name artists and recording a new theme song for ESPN’s broadcast Baseball Tonight with MLB legend and sports analyst John Kruk, and skyrocketing into the Top 50 on Billboard’s Heatseekers and Country Albums charts with their debut self-titled album may leave many bands exhausted, the Davisson Brothers Band remains hungry for more and excited for their next project in cue.

Official home to West Virginia’s own Owen Schmitt and The Davisson Brothers Band.

The saloon not only represents each of them but the entire state of West Virginia. The saloon is comprised of barn wood and memorabilia from all over the state. Some already say its a museum in its self. A must see attraction!

Landau back IN STUDIO accompanied by legendary musicians ›